in Institutional, Power and Energy

Fires, floods and hurricanes, droughts and blizzards are becoming less and less striking, even despite the devastation they cause around the world. These events are quite often on the agenda and the common denominator is climate change.

Warnings about the possibility of climate change emerged in the 1950s, and as the decades passed, the apocalyptic scenarios started to become increasingly real. Although the debate has been going on for too long, we know today that human activity is the main cause for said phenomena. We are burning too many fossil fuels, cutting down far too many trees and producing too many greenhouse gases, which increases the planet’s temperature. The 2011-2020 decade was the warmest on record, with an increase of 1.1ºC above the pre-industrial levels recorded in 2019. There’s maximum urgency, and the European Union aims to avoid more catastrophic environmental changes. In this sense, it designed a set of measures aimed at fighting against climate change on several dimensions. One of them involves reducing the emission of polluting gases by limiting the use of fossil fuels, preferring clean, or renewable energy sources instead.

Portugal at the forefront of the energy transition 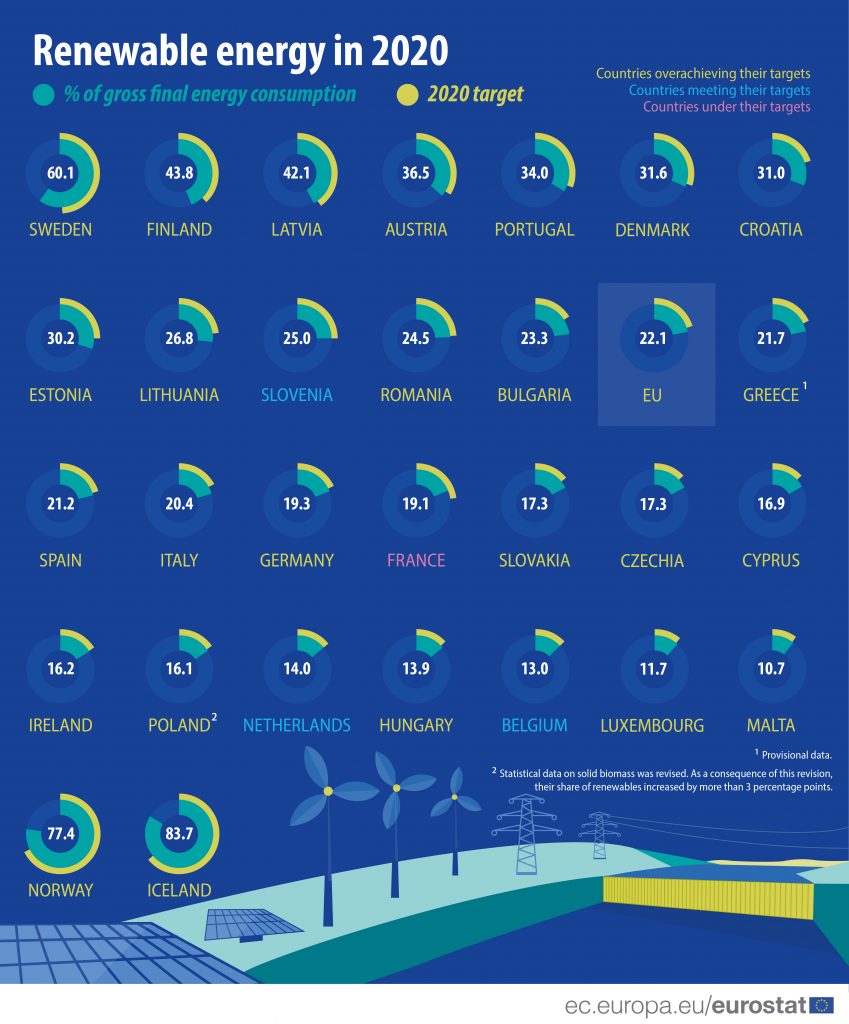 Renewable energy comes from natural resources replenished throughout our lifetime, like power from the sun and the wind. Solar photovoltaic, hydro, geothermal, wind, and wave and tidal energies are examples of renewable energy, as opposed to energy obtained from fossil fuels, like coal, natural gas, and oil, which are used at a higher rate than their replenishment period. Fostering the production and preference of renewable energy is one of the vectors on which the European Green Deal plan is based, which aims to promote a green and sustainable transition of societies and industries.

“In Portugal, about 60% of the electricity we consume comes from renewable energy sources. Portugal witnessed an outstanding evolution and invested in renewable energies from the get-go”, said João Peças Lopes, researcher at INESC TEC and Full Professor at the Faculty of Engineering of UP. However, this scenario only reflects electricity consumption. Regarding total energy consumption, and according to 2020 data, only 34% of energy consumed in Portugal is renewable – still almost 12 points above the European average (22.1%).

Although most European countries are exceeding the targets for the use of renewable energy, there is still a long way to go, and scientific research and innovation will help us to achieve said goal. “We are clearly one of the countries that leads the energy transition in Europe, but Europe’s dependence on fossil fuels for electricity production is still quite significant, namely concerning coal and natural gas”, concluded João Peças Lopes.

Between 2005 and 2019, Portugal reduced greenhouse gas emissions by 22%, a trend that will continue until 2030, until the electricity from renewable energy sources represents 80% of total consumption. This is the goal of the National Energy and Climate Plan 2030; but even more ambitious is the 2050 target, the year in which carbon neutrality must be achieved, i.e., to achieve a neutral balance between greenhouse gas emissions and their capture from the atmosphere. 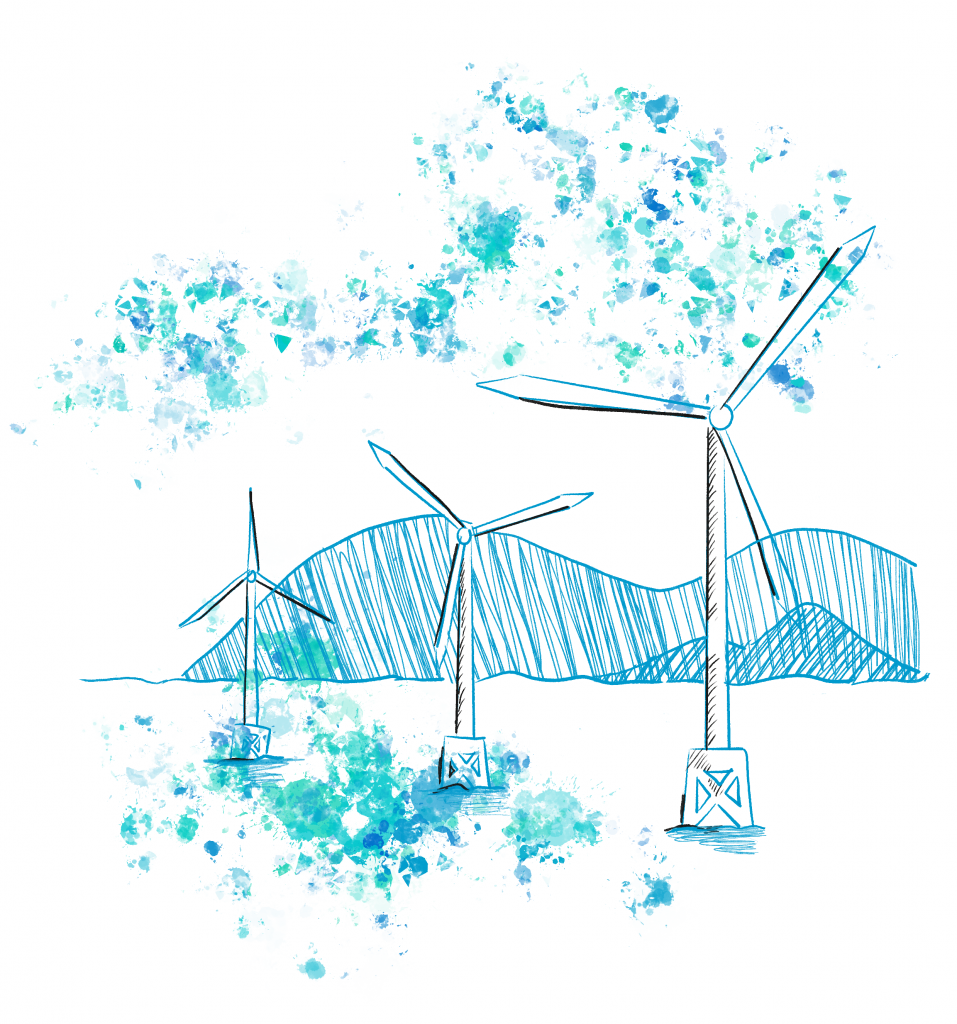 From the mountains to the sea, riding on the wind

According to 2019 data, wind is the main resource for renewable electricity generation in Portugal. But wind power is not produced exclusively high up in the mountains. “The best onshore sites with resources for wind power generation are already occupied. The sea, on the other hand, is vast, with a lot of free space. The sea is an important resource, not only regarding energy, but also in terms of availability”, said Bernardo Silva, a researcher at INESC TEC and Professor at the Faculty of Engineering of UP, head of INESC TEC’s participation in the European project EU-SCORES. The focus of the project is offshore wind energy, and to hybridise it with other energy sources, making use of the same infrastructure connected to the shore. “In this project, we are studying the hybridisation of offshore farms, through wave energy conversion devices, in order to increase our energy output, using the same connection infrastructure, which has significant implementation costs”, explained the researcher.

Launched in September 2021, the project is still going through a phase of preliminary studies, although the location of the Portuguese demonstrator has already been defined. It will be installed in Aguçadoura, Póvoa de Varzim, where the WindFloat wind turbine has already been installed. “There is an onshore substation at this location, with monitoring capacity and a permit for the installation of an offshore wind farm. Due to these previously existing conditions, this was the place chosen”, explained Bernardo Silva. 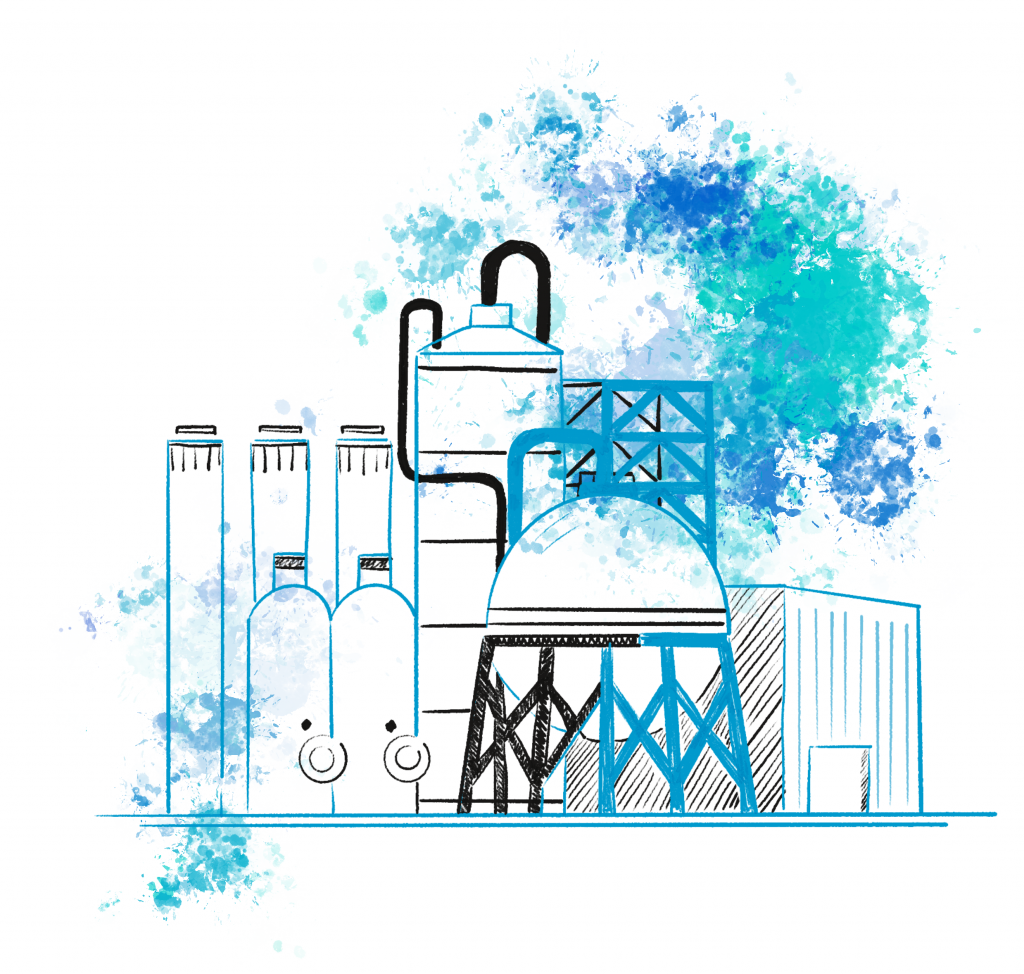 In this sense, green hydrogen can be quite useful. Hydrogen is a clean source which, when consumed in a fuel cell, produces only water and no polluting gases are emitted. Green hydrogen is produced by the electrolysis of water (separation of oxygen and hydrogen atoms) using energy from renewable sources – preferably those who don’t register high demand.

“In the near future there will be a surplus of electrical energy from wind and solar photovoltaic resources in spring and summer, as there is less demand when compared to colder months. At these periods, the surplus amount of electrical energy can be converted into hydrogen, stored for a few months in caves, and then used in critical periods (autumn and winter)”, explained João Peças Lopes.

Portugal uses underground caves to store natural gas reserves, and it would be possible to use the same strategy to store green hydrogen reserves. “Once stored, we can use the hydrogen and convert it into electricity, in a cycle called Power to Power,” added the researcher. This solution would be quickly available, ensuring security of supply whenever the generation of electricity from renewable sources is not able to meet demand.

The European project GREENH2ATLANTIC started in December 2021, and it aims to place a 100MW electrolyser for hydrogen production in Sines. With a duration of six years, this will be a pilot research project. “The production of the hydrogen resulting from the electrolyser will have industrial applications, namely by being injected into REN’s gas pipelines, thus mixing natural gas with a percentage of hydrogen, as well as into the hydrogen pipelines that will be built in the future,” revealed João Peças Lopes, project coordinator. In addition to hydrogen, the electrolyser also produces oxygen, with significant commercial applications, thus contributing to the improvement of the infrastructure.

The hydrogen production process, however, leads to significant energy costs. From the low yield of electrolysis to the need to compress the gas for storage, as well as the low yield of hydrogen conversion back into electrical energy. “We could still provide between 50-80€/MWh to the grid, which is very good, considering that in March 2022, the electricity values reached 700€/MWh,” explained the researcher.

However, the energy transition is not just about producing more energy (and greener). Electrification will render unnecessary the use of fossil fuels, which are currently contributing to the increasing electricity prices. “We are going through an energy crisis, with high prices, but energy from renewable sources holds lower costs, thus acting to prevent further increase of energy prices,” explained Bernardo Silva. 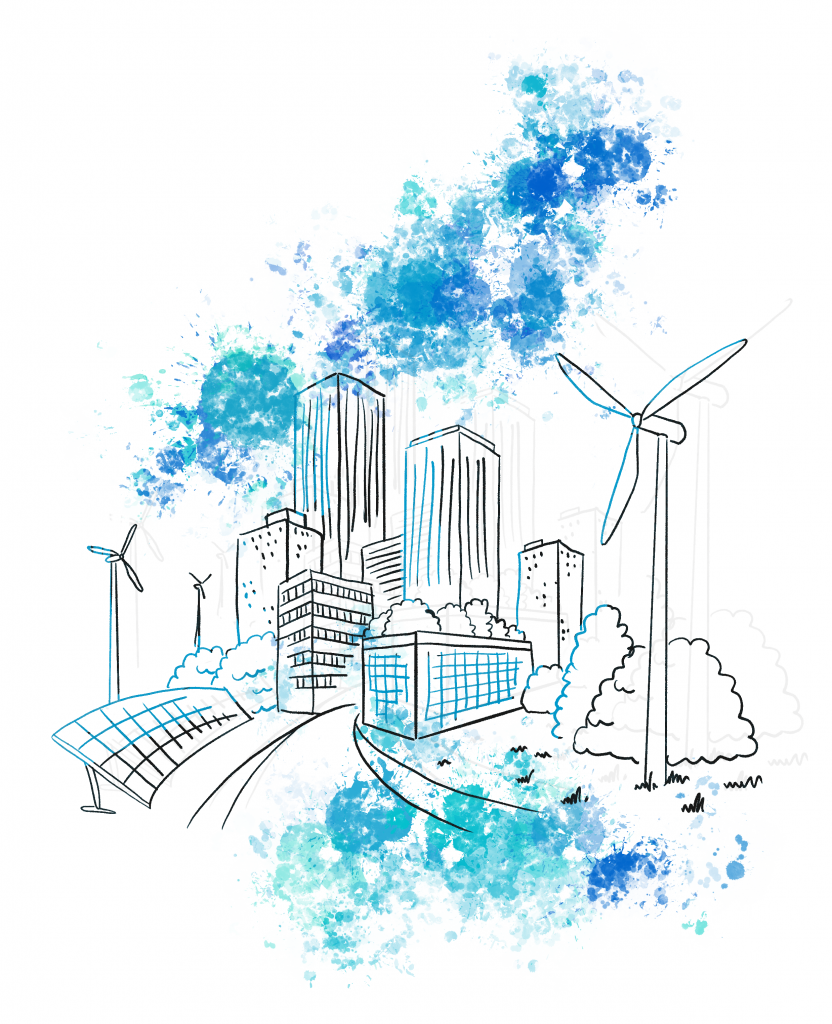 In addition to more powerful turbines, more efficient equipment and better storage capacity, there is a sense of citizenship that cannot be overlooked in order to achieve the goals of carbon neutrality. And this is precisely one of the dimensions of DECARBONIZE, a project funded by Norte2020 program that aims to support, promote and demonstrate systemic transformations for carbon neutrality in the northern region of Portugal. “One of the pillars of the project focuses on the role of citizens, and it aims to help them understand the actual impact that Portuguese energy efficiency policies and actions have on society,” said Tiago Soares, INESC TEC researcher.

The energy transition has associated costs; promoting the preference for more efficient equipment, or structures and materials that allow better isolation of buildings, is done through programmes such as the Efficiency Voucher, aimed at underprivileged people, who struggle to increase the energy efficiency of their homes. “We found that not too many people have been joining this initiative, and we believe that the main reason is the low energy literacy of the target-group of said initiative, as well as the requirement to be owner of the building, which significantly reduces the number of economically or socially vulnerable people who are eligible to apply. This is a very relevant initiative, but it is not working as well as it should, due to lack of people’s involvement”, explained the researcher. The Program of support for More Efficient Buildings is now running its second call and “it has been getting more applications because any person that owns an occupied housing building can apply” he added. However, the bureaucracy associated with submitting applications might be an obstacle in some cases, because citizens must support certain costs, apply and wait for the reimbursement of their investment.

We are too dependent on Russian fossil fuels, especially gas.

We need to diversify our suppliers, notably by switching to LNG and increasing our share of renewables.

For these reasons, we are outlining a series of measures to respond to rising energy prices in the EU.

A race against the time

Due to the invasion of Ukraine by Russian forces, the energy transition in the European Union may have to undergo some changes to ensure the energy security of the 27 member–states, particularly regarding dependence on natural gas from Russia. Fuel prices skyrocketed in March, which pushed the European Union to urgently seek a solution to the energy crisis – which is aggravating the inflationary trend witnessed even before the Russian invasion.

The researchers who participated in this edition of Spotlight are unanimous on the future of the energy sector and the need to improve the European energy system’s resiliency. “Given the climate crisis and the need to reduce dependence on fossil fuels – even if the suppliers of fossil fuels diversify – we must accelerate the energy transition. If we’re able to do so, over the next 20 years, we will depend much less on fossil fuels, use much more electricity and hydrogen, and achieve the economy and society’s energy transition and a decarbonisation much faster”, concluded João Peças Lopes.

The path is laid out and the goal is already established. It remains to be seen if we can achieve it in due time.