During July, a new edition of CTM Summer Internships took place, an annual initiative that welcomes university students in an immersive experience that allows them to gather knowledge, experiences and contacts in the areas of telecommunications and multimedia.

Promoted by INESC TEC’s Centre for Telecommunications and Multimedia (CTM), this 6th edition took place in a hybrid format, leaving behind the entirely online dimension to which it was forced the previous year. In the words of the event’s Organising Committee, “the CTM Summer Internships program has been gaining more and more relevance among the student community, establishing itself as one of INESC TEC’s annual reference events and as an important experience for students regarding the future development of master’s and doctoral theses in the area of ​​telecommunications and multimedia”.

Organised in teams led by researchers from this INESC TEC R&D center, the students had the opportunity to carry out a short-term scientific research project (4 weeks), at the same time they recognized INESC TEC as a host institution to integrate future research projects and carry out master’s and doctoral theses.

The CTM 2022 Summer Internships had the participation of 24 students from the Faculties of Engineering and Sciences of the University of Porto. 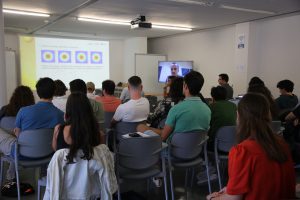 According to the evaluation made by the participants, the initiative went well and the positive evolution over the years is evident. The Organizing Committee invited an examiner from each of the four CTM areas to evaluate the works presented in the final session that took place at INESC TEC on July 28th. The examiners were Ricardo Cruz (VCMI), Manuel Ricardo (WiN), Inês Teixeira (MCT) and Vítor Tavares (OET). In the opinion of the examiners, “the general quality of the work carried out was exceptional, especially given the duration of only 4 weeks for the internships”. In the end, prizes and honorable mentions were given to the best works.

The thesis “Biomedical multimodal explanations – increasing diversity and complementarity in explainable artificial intelligence”, developed within the scope of the Master in Biomedical Engineering at the Faculty of Engineering of the University of Porto, was distinguished as the “CTM Best Master Thesis 2022”. This work was carried out by Diogo Mata, supervised by Jaime Cardoso and Wilson Silva, and stood out for the quality of the document and the impact that this work could have in the medium term in the area of ​​medical diagnosis. 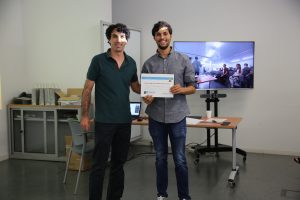 “Due to the high quality of all the works, the jury for the CTM award for the best master’s thesis 2022 decided to grant honorable mentions to the remaining four candidate works”, says Rui Campos, one of the coordinators of CTM. The award consisted of a certificate that includes a connection to CTM for one year and support in the publication of a scientific article in an international conference or open access journal. The certificates were delivered at the closing session of the Summer Internships, which took place on the 28th of July, at INESC TEC.

The INESC TEC researchers mentioned in this news piece are associated with INESC TEC and UP-FEUP.